Ssc is the Mean Summit Curvature for the various peak structures. Peaks are found as described above for the summit density. Ssc is given by the following:

(Note that Ssc is not strictly defined in the ISO 25178-2 but was established earlier in the research which contributed to ISO 25178-2. Future sections of ISO 25178-2 may address parameters such as Sds as “Feature Parameters”.)

Evaluated only over the summit features. 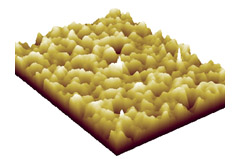 Ssc is useful in predicting the degree of elastic and plastic deformation of a surface under different loading conditions and thus may be used in predicting friction, wear and real area of contact for thermal/electrical applications.